From a surprising entry in Europe to a disappointing year on LCK powerhouse SKT, Thal has yet to fulfil the potential that was expected of him after his emergence in the scene. However a recent swap to Hanwha Life Esports has brought with it a change of fortunes for the former rank 1.

When the Son of kaSing took the EUW ladder by storm in 2017 with a 70% winrate, fans speculated as to which Korean top-laner may have invaded their region. A Reddit investigation uncovered Thal; a rookie Trundle one-trick who had previously only had substitute positions on China’s ZTR Gaming and NA’s Apex Pride. 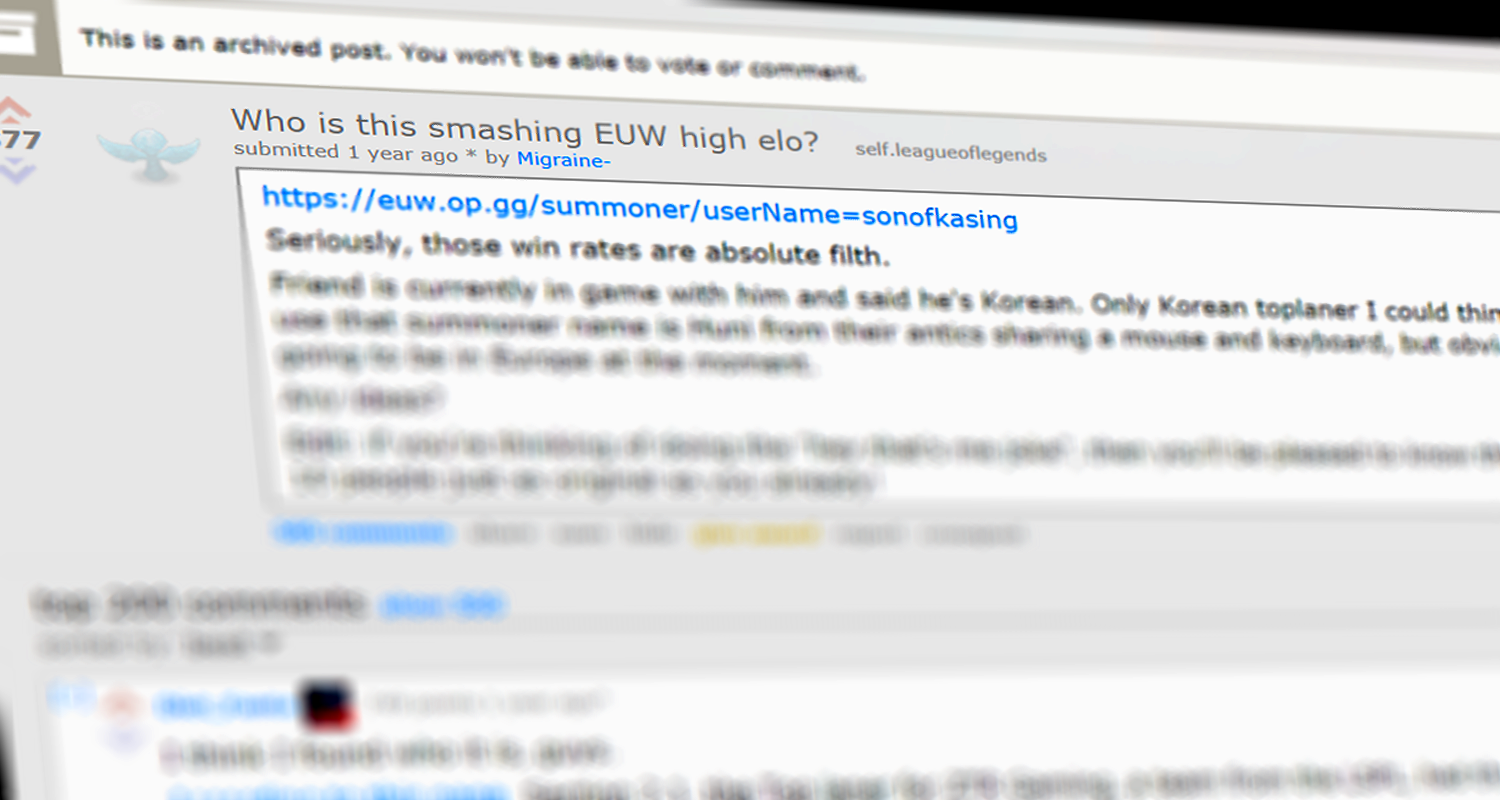 He joined the newly formed European team Red Bulls for the 2017 Summer split alongside EU veteran kaSing and fellow solo-queue prodigy MagiFelix, as well as Korean jungler Moojin and German ADC Sedrion. They swiftly qualified for the European Challenger Series in a split that would include a plethora of future EU LCS/LEC players including a Schalke roster with Upset and Norskeren and a Giants squad with Jiizuke, Attila and Jactroll.

Finishing in 3rd place with mixed results was enough for the team to gain entry into the Playoffs, where a Bo5 win over Schalke would have qualified them for the Spring 2018 Promotion tournament and a chance to play for an LCS spot. However, a 3-1 defeat ended Red Bulls’ hopes and the team was disbanded shortly after.

His performance on Red Bulls showed enough potential to earn Thal a dream move to SK Telecom. The most decorated organisation in the game’s history were making roster changes after a tough loss in the Worlds 2017 final and hoped to bounce back in 2018.

Thal’s debut on SKT would go on to make League of Legends history, albeit not for the best of reasons. A 95 minute defeat saw both Jin Air’s Teddy and SKT’s Bang beat the previous CS record with 1,465 and 975 respectively in what was the longest competitive match ever played, a record that will likely never be beaten.

SKT then went on a run of 5 straight Bo3 series losses in the 2018 Spring split, earning an abysmal 1-5 record after the first 3 weeks. However, as Thal gained a run of games where he was favoured ahead of fellow top-laner Untara, SK Telecom’s results showed improvement and led to a 4th place regular season finish. During this regular season, SKT won 15 out of the 25 matches where Thal featured compared to 8 in 21 where Untara was selected. 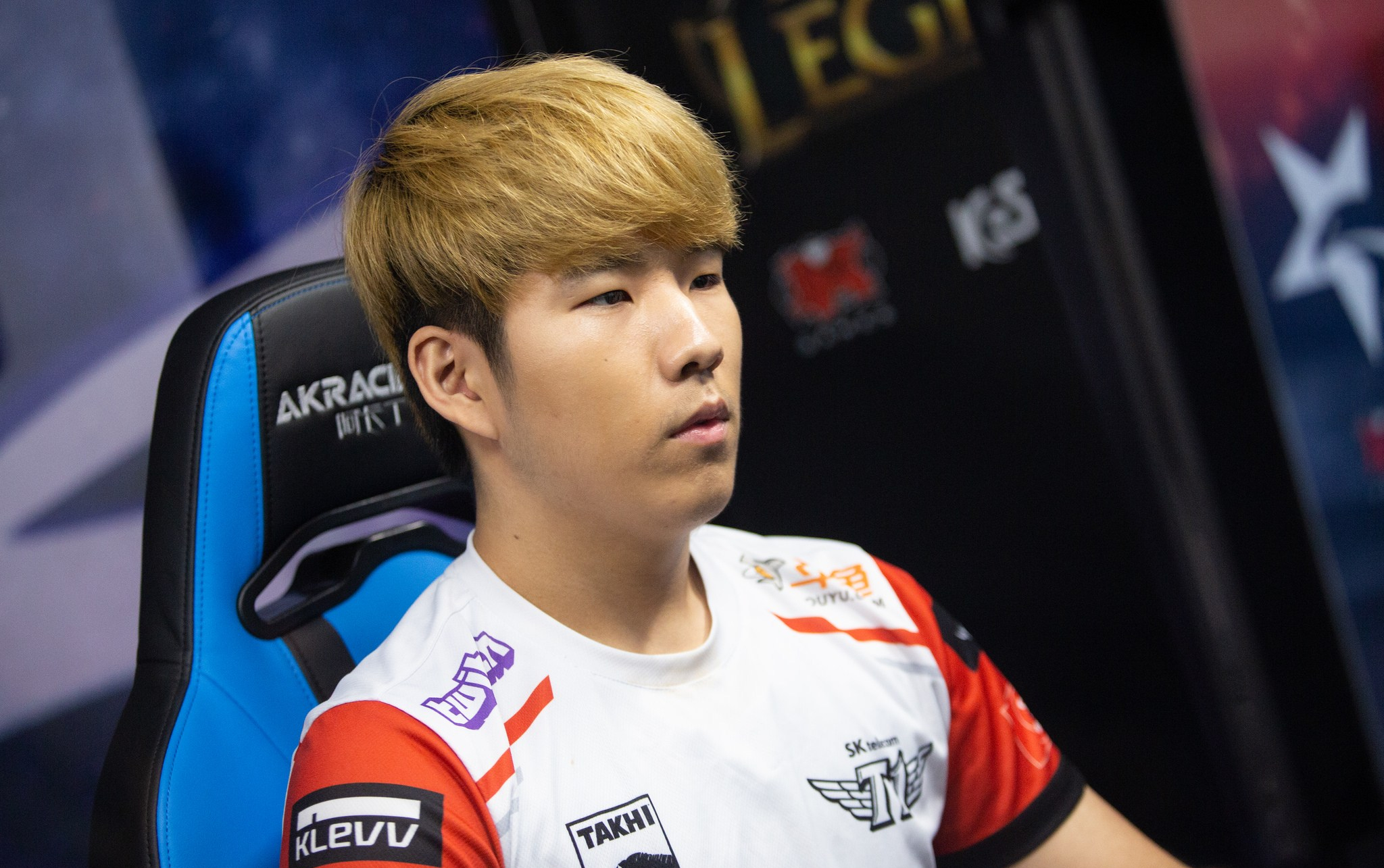 4th place meant that SKT reached the Spring 2018 play-offs, and a 2-1 victory over KSV set up a telecom wars series against KT Rolster in the next stage of the gauntlet. This proved to be a step too far for SKT as they suffered a 3-1 defeat, despite taking a 1-0 lead having won the first match.

Bowing out of the play-offs confirmed SK Telecom’s omission from the Mid-Season Invitational, a tournament which they had won the previous 2 years back-to-back and a 2 month break between the Spring and Summer splits unfortunately did not bring a change of fortunes for the team.

4 losses in a row followed by a victory over fellow strugglers Jin Air found SKT in 8th place after 2 weeks and already 2 wins away from a Playoff position. A huge meta shift saw mages in the bot lane and an interesting couple of weeks where funnel comps were the norm. SKT struggled to adapt, so much so that Faker spent a significant portion of the split out of the team with Pirean taking his place.

A highlight for Thal came in the opening match in a series against Afreeca Freecs. Though the series would ultimately end in defeat for SKT, fans were exhibited just what Thal could be capable of given the right opportunity as a 5-man Slicing Maelstrom on Kennen tore into Afreeca.

Defeat in the series meant that Playoff hopes were incredibly slim for SKT, and further losses to Griffin and Kingzone DragonX sealed their fate.

After being dropped by SK Telecom ahead of the 2019 season, Hanwha Life Esports picked up Thal for a refreshed roster that would see him link up with former Red Bulls teammate Moojin. Hanwha Life had narrowly missed out on the Playoffs in Summer, finishing joint 5th with a 10-8 record but falling behind Afreeca Freecs based on game record.

Their first opponents of Spring were the reigning champions from the Summer, KT Rolster, who had made a number of roster changes of their own. Hanwha turned around a 0-1 start to take the series 2-1, one in which Thal showed solid performances on Urgot and Sion with the former going on to be a key champion for the rest of the split so far.

Proving himself to be an accomplished tank player as well as showing proficient performances on the likes of Aatrox and Vladimir, Thal has so far helped Hanwha to a 5-4 record where they have only suffered losses to the top 4 placed teams (Griffin, SANDBOX Gaming, SKT and DAMWON Gaming).

He currently boasts the 2nd highest KDA of any top-laner in the LCK with 4.09 (only behind Griffin’s Sword with 7.57). Perhaps more impressive is the fact that he does this with a gold share of 21.5 %, the 8th highest in the league, meaning that he is able to have a positive impact on his team’s matches despite not being the main focus of the team’s resources. This is further demonstrated by his 7th place in kill share (20.2%) and gold per minute (387) but 3rd place in kill participation (66.9%) and average assists per game (4.61).

Looking ahead for Thal and Hanwha Life, their next 4 series are up against the 4 teams currently below them in the table: Afreeca Freecs, Kingzone, Gen.G and Jin Air. 4 wins in a row is not out of the realms of possibility and would greatly help in solidifying a Playoff position as we head towards the middle point of the split.

One thing we are yet to see from Thal in particular is whether he is able to lead the team on carry champion picks. With mixed results on carries in the Summer on SKT when the meta required them, Thal may have been somewhat fortunate that the meta has favoured tanks in the top lane so far in 2019 with Urgot and Aatrox in particular seen as almost certain picks/bans.

How do you rate Thal’s performance on Hanwha Life so far this year? Let us know by tweeting @NineTeeSix.